A Girl in a Rat Suit

Drop D and everything else up in the air.

There is a right way to play something wrong

Hotel Terminus is off to Mr. Garson in LA, who is now busy recording the piano at his house. He knows the basic ideas of the piano, but has total creative freedom to play whatever he feels like.

The very first component of Hotel Terminus: the guitar riff that I send to my grandfather Boy Grunert back in December. I asked him to play something on his piano for the track, and decided to go to Ribe where he lives to record it. 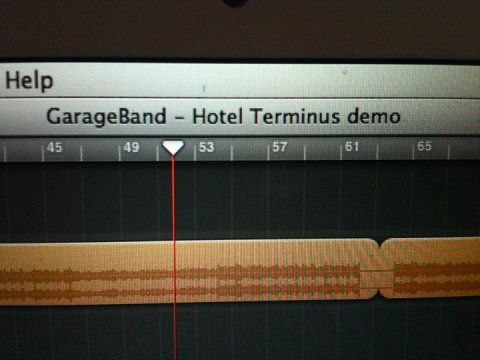 The case is that I wasn’t able to hear what he was playing as we recorded it, and that led to the unorthodox, almost random use of piano on the demo.

I have a cable with an USB output that goes directly from my guitar to the computer. This cable luckily worked with my grandfather piano as well, but somehow the speakers of the computer wouldn’t play the piano sound when the cable was plugged in. The headphones were ok though, so Boy had one of them playing in his ear while recording. I heard nothing.

This means that I never heard where Boy played what in the song. Which didn’t hit me as a problem until I got home and everything sounded beyond confusing. But since I travelled 600 km to record it, I was very determined to use some of it no matter what, so I edited everything into bits and pieces and placed it randomly throughout the song. This awkward and occasionally out of tune and tempo piano inspired Mario to think of Mike Garson to have him bringing the idea of playing something “wrong” in the right way to the next level. When Mario suggested Garson I listened to a bunch of his work and was blown away by this effortless, creative and uncomplicated way of playing something very complicated. So beautiful and so powerful. And if he is good enough for Bowie, Reznor and Corgan, he is of course good enough for me…. I’m so excited!

You are currently reading There is a right way to play something wrong at A Girl in a Rat Suit.